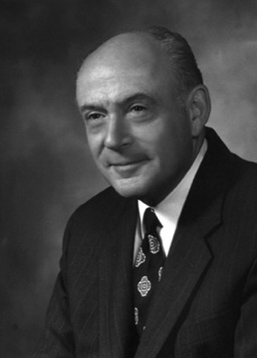 While Irwin Lerner’s career was capped by his tenure as the president and CEO of Hoffman LaRoche, one of the industry’s most successful companies, he often modestly refers to himself as “an old copywriter from Organon.” It is obvious that he is proud of his time in advertising and writing, as borne out by his staunch support of medical advertising during his long and successful career. But, his love of the written word notwithstanding, it is his record of leadership and integrity that makes him truly remarkable.

After a stint as a wordsmith at Organon, Lerner rose to advertising and sales promotion manager. He then moved to Geigy Pharmaceuticals as a sales promotion manager responsible for products including Butazolidin, Tandearil, Anturane, Persantine, and Preludin. In 1962, he was recruited to Roche as advertising product manager for Librium, one of the industry’s first “mega-brands.” He was named director of advertising just prior to the launch of Valium, and made the brilliant marketing decision of positioning Librium for anxiety and Valium for psychic tension. His strategy and promotion clearly established each product’s use and allowed Roche to successfully market two major drugs in the same field.

Always an innovator, Lerner sought new and distinctive ways to get his product message to physicians, such as the Network for Continuing Medical Education. At its peak, this communications vehicle went to 800 hospitals, with a tape sent out every two weeks with information on procedures and medical advances worldwide, and commercials.

Based on his success and leadership qualities, Lerner ascended to the position of president and CEO of Hoffman LaRoche. This was unusual as most CEOs with major pharmaceutical companies came from finance or sales rather than advertising and marketing. His support of advertising permeated the company and anchored the success of numerous Roche brands. When industry critics blasted advertising, Lerner came to its defense, among other things drafting a White Paper on the value of advertising that drew commendation from Dr. David Kessler.

Under Lerner’s leadership, Roche introduced the first co-marketing arrangement in the United States. He approached an old Organon colleague, Joseph Ruvane, now head of Glaxo, and laid out the case for sharing resources to market Zantac. The benefits to both companies, as well as doctors and patients, caused the concept to be emulated by others with co-marketing and co-promotion programs, but never with the same success.

Lerner led by example. He set goals for the company – success, responsibility, fairness, and innovation – and encouraged others to sign on to the mission. When the drug approval process slowed to a crawl, he went before Congress to ask for more money for FDA, and then lead the industry’s efforts to establish industry-paid drug user fees to expedite the process. He established programs to assist indigent patients, because he believed that no patient should be without a Roche drug they needed because they couldn’t afford it.

He made full use of advertising, but also made sure that what was said and done was accurate and responsible. When a Roche drug had serious side effects, he insisted that doctors be made aware of not just the benefits, but the risks as well. He was an inspiring leader, loyal to his staff, colleagues, and friends, causing one staff member to say that when he came in the room, he felt like “standing up and saluting.”

The list of Lerner’s accomplishment and successes is long and impressive. He used advertising wisely and responsibly, and defended it fiercely when he felt it was unfairly criticized. He recognized his company’s obligations to those who took its products and those who worked in its offices. Where others saw problems, he saw solutions. The bottom line, according to one long-term friend and colleague is that “Irwin Lerner is a class guy.”